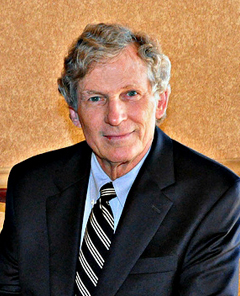 Rob Blue, Jr., is one of Firm’s founding members and is a Shareholder of the Firm. Mr. Blue has substantial experience in the areas of Banking Law, Real Estate Transactions and Litigation, and Condominium Law. Mr. Blue represents various developers, lenders, and landowners in Bay, Gulf and Walton County, Florida. He has been designated an “AV” rated by Martindale-Hubbell, which is the highest possible peer review rating in legal ability and ethical standards.

While attending law school at the University of Florida, Mr. Blue was a member of Florida Blue Key, student leadership honorary, and was named Outstanding Male Graduate during his senior year in 1967. After graduation from law school, he entered the armed forces and served as Captain in the USAF from 1970-1974, as a JAG officer. After serving his country, he moved his family to Panama City, Florida and began practicing law with the firm of Hilton, Bennett, Logue, Burke & Paulk, P.A., which included one of his present partners, Les W. Burke.

Mr. Blue is active in the local community. He has served as a director for United Way and as President of Bay Arts Alliance and Girls Club, Inc. He is currently a member of the Panama City Rotary Club and St. Andrews Bay Yacht Club and enjoys hiking, sailing and other outdoor activities.